© Kuddelmuddel Travel, 2018. Unauthorized use and/or duplication of this material without express and written permission from this site’s authors and/or owners is strictly prohibited. Excerpts and links may be used, provided that full and clear credit is given to Kuddelmuddel Travel with appropriate and specific direction to the original content.

Last December we rented a house for a month in Iznate, a tiny Andalusian village in the province of Malaga. We had been travelling a lot and living out of suit cases and wanted a home base for a while to rest up a bit. We were also expecting family to visit for the holidays, so we needed a big enough place to accommodate everyone. Iznate has only about 800 residents and living among them was a unique experience. When we first arrived in the village we had hired a driver to drop us off. As he was not very familiar with the place he stopped at the first bar in Iznate to ask directions. When he came back out he told us that nobody there spoke any Spanish, only Andalusian. Fortunately the second bar was where the Spanish speaking villagers hang out and we were able to find our new temporary home.

The village was very old, full of narrow, twisty alleys most of them extremely steep. Some streets are simply stairs, 100 steps to bakery every morning! All the villagers seem to be very fit, young ones chasing soccer balls through these alleys and even the elderly still going for their daily walk. 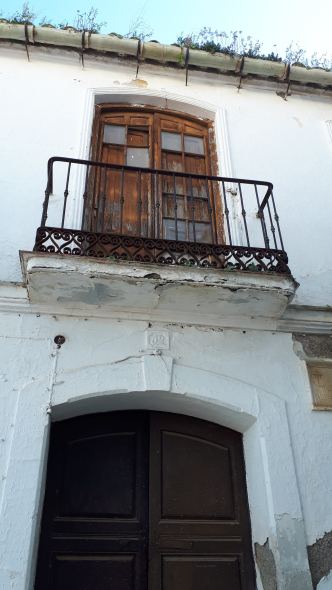 Our house was very old and built in the traditional style, narrow and tall, four floors and a roof terrace. The walls were 2 feet thick, and above the doors and windows you could see the exposed tree branches that frame them. There were all the things you would expect from a very old house; steep, narrow stairs, dodgy plumbing and damp spots on the walls. Staying there felt a bit like camping out all the time, but it totally fit in with that place.

Iznate has a few shops, the bakery of the 100 steps, two grocery stores, a pharmacy, two fish stores which were always closed and three bars. The village keeps traditional hours. Shops are open in the morning followed by a long siesta when the whole village heads to the bars for tapas and to gossip away the afternoon. In the evening some stores opened again for a few hours. This took a few days for us to figure out. Nobody in the village speaks more than a few words of English and our Spanish is not much better, but we all did very good pantomimes!

Even though Iznate is not far from the main highway it felt isolated because the bus only stops twice daily at inconvenient times on weekdays and even less on weekends. Eventually we decided to rent a car which presented its own challenges. The main highway that follows the coast is a 4 sometimes 6 lane freeway, and the secondary roads that connect the villages are twisty but not too narrow and very well maintained. The towns and villages are a different story though. Many streets are so narrow that even tiny European cars have a hard time squeezing through. There is also not very much street parking, and the underground parking garages are extremely tight. I was always happy when we could leave the car somewhere and walk the rest of the way. 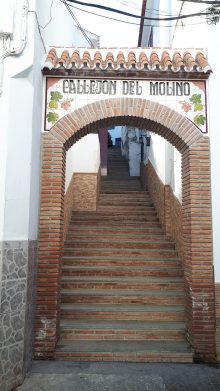 With the car we were able to make several awesome day trips. Malaga City was only about 40 mins away, Granada an hour and a half. We also went to Nerja (46 km), Gibraltar and Ronda from there (both were about a 2 hour drive), and explored the beach towns along that stretch of coast.

The neighboring villages and the countryside here are very beautiful as well. For example the village of Archez has an old tower from the Moorish era that looks straight out of Marocco as well as a very old mill along the little river that flows through the village. The signage there is a little confusing. On the right side of the river the signs to the mill point down a path that is hard to walk and seems to peter out but this actually eventually leads to the ruins of a mill. On the left side there is also a sign and a much better path leading through avocado plantations but you only get to see the building from across the river.

Driving through these hills we learned that different trees are cultivated at different elevations. Iznate is only 300 m above sea level and is surrounded by mango groves. A little higher you find avocado trees, then olives and finally almonds. There are also still a few vineyards mostly for the production of raisins, but this crop is becoming less popular.

To the north of Malaga City lies a large nature reserve, the Parque Natural de los Montes de Malaga. This is a large area of dense pine forests with valleys, waterfalls and 19th century traditional houses. This place is popular with city dwellers who come up here mainly on the weekends for hiking and relaxing meals at the many restaurants or ventas along the road. The place is huge so you hardly see another person while enjoying the fresh mountain air. On our hike we found a grove of cork oaks. It’s fascinating to see how the thick bark regrows again and again after being harvested.

We found our time in this laid back region very relaxing. Maybe you will be able to visit here as well.

View all posts by Travelingstef

SWEET B GALLERY
Which Way To The Beats

Too much coffee and good adventures.

My Dear Kitchen in Helsinki

Did I ever tell you how much I love cooking?

nicole sundays - growing up but make it tragic humor

brought to you by Cheez-Its and crippling despair